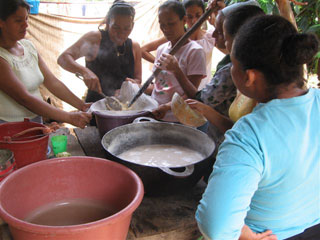 MEDICAL researcher Dr John Stanford and his wife Cynthia, a registered nurse, saw shocking deprivation and misery as they travelled the world in the course of their work. They also discovered the skill and frugality of really poor people in making a little help go a long way. So on each trip they took as much as they could carry in the way of basic medical supplies funded by an annual fete at their Kentish village home.

From this simple beginning the Catriona Hargreaves Charitable Trust grew into an officially recognised charity, registered number 1064838 and named in memory of a former patient.  Its early work was mainly among people suffering from leprosy or tuberculosis, often complicated by HIV. This expanded to an interest in the less well-known curse of Buruli ulcer that has crippled generations of children in Africa.

Help is focused on individual patients with these and similarly chronically disabling problems, limiting their effect and enabling them to support their families thus, strengthening the societies they live in. We do not ship in cargoes of “foreign aid” which destabilise fragile economies; our helpers on the spot buy skilfully in local markets to support the community.