Lepra is excited to update you on the significant progress that has been made with the Catriona Hargreaves Charitable Trust (CHCT) funding in November and December this year. Our team in Andhra Pradesh regularly provided us with up-to-date information about the ongoing project activities related to active case finding, disability prevention and training programmes for the frontline health functionaries. 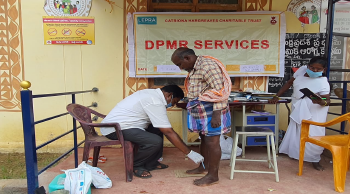 From regularly conducting surveys, finding new areas for the active case findings, leading disability prevention activities, disseminating information to identifying new volunteers from the community and training them on Leprosy, our team ensured the smooth operation of all the activities promised. Moreover, it has been a continuous effort to identify leprosy-affected people through active case finding, disability prevention, and to connect them with livelihood opportunities.

Besides managing these operational activities of the project, we made sure the administrative requirements are fulfilled, such as submitting the letter of request for conducting surveys and training to the State Leprosy Officer (SLO) so that the project can go on without any obstacles from different stakeholders.

The following are the major accomplishments from the project in November and December 2021:

The Rapid Enquiry Survey (RES) was conducted in 4 areas (Chinnapuram, Ranigarithota, Surampalli, Machilipatnam) with 2 volunteers in November and December.  Around 1020 Households were covered during the survey, and a total population of 3888 were enumerated, out of which 3397 were examined. Among 13 suspect cases, 5 Multibacillary (MB) and 1 Paucibacillary (PB) cases were reported, and they were kept under Multi-Drug Therapy (MDT) at the concerned Primary Health Care Center and Urban Health Centers.

The focal survey was conducted in 6 areas at Bandipalem, Pedana, Venkata Durgambapuram, Chinnapuram, Kondapalli, Budavada, Vatsavai, Talluru, and Machinenipalemm Jaggaiahpet,  where with the involvement of 11 volunteers, the Focal Survey was conducted in November.  A total of 1529 Households were covered during the survey.  4924 people were enumerated and 4326 were examined.  Out of 23 suspects, 1 Multibacillary (MB) case was reported and the person was kept under MDT at Local Urban Health Center.

In December, a Focal survey was conducted in 6 areas at Malkapuram, Indugupally, Buchavaram, and Vijayawada urban area by 6 volunteers. Through this survey, 1529 households were covered like the previous month during the survey. Among them, 853 people were enumerated and 723 people were examined. 7 suspects have been reported, where 2 Paucibacillary (PB) cases were confirmed and they are kept under Multi-Drug Therapy (MDT). 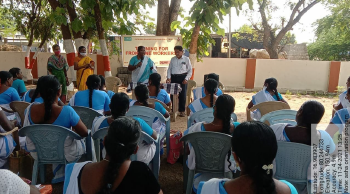 During November, approximately 556 pamphlets were distributed with the support of the Information, Education and Communication (IEC) mobile van before conducting the survey, and a mic announcement was arranged for creating awareness on Leprosy. 86 USHAs (Urban Social Health Activists) were trained in two areas- Rajeev Nagar and Vatsavai UHCs.

In December, 1014 Pamphlets were distributed with the support of the Information, Education and Communication (IEC) mobile van before the Survey Programmes took place. During the IEC Van Propaganda in Jonnapadu village, 2 MB Cases were reported and they were kept under MDT at the nearby Primary Health center and both of these people started Multi-Drug Therapy (MDT) for MB.

During November, Lepra organized 3 camps in the Krishna District, through which we reached 37 people affected by Leprosy with much needed Disability Prevention and Medication Rehabilitation (DPMR) services. Around 37 people with grade 1 and grade 2 disabilities were provided with self-care kits, and among them, 15 people received customized MCR footwear. In addition, physio aids were provided to 8 participants in the camp.

In December, we managed to organize 4 camps in the Krishna District, and through these camps, we reached 45 Leprosy affected people with Disability Prevention and Medical Rehabilitation Services (DPMR) services. In these camps, counselling, basic health education, and ulcer care were provided as a part of the DPMR services. Self-care kits were also provided to all 45 people with grade 1 and grade II disabilities. Moreover, Lepra provided 21 custom made MCR footwear to the target beneficiaries. For those who needed further support, different types of physio aids were provided such as goggles, crepe bandages, splints etc. 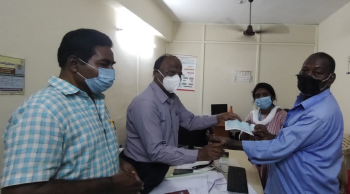